Lockdown has been a busy time for Wudang Pai GB, so busy in fact that we did not have time to update the news page, so this is a note on what has happened, and what is to come in the post-lockdown era.

Classes went online the week before lockdown officially started, and Zoom became our new training hall. There was need to adapt the material to suit small spaces and the atmosphere as everyone became more health conscious. The kung fu class on Thursday evenings was paused and replaced with Five Element Qi Gong, starting out with Qi Gong for the lungs and moving on to Qi Gong for the heart, to soothe anxious minds as we enter uncertain times post-lockdown.

The switch online meant we gained some long-distance students from France, Germany and Norway. Terms became four weeks as advanced planning disappeared. Online lessons rely much more on visuals, so baggy uniforms went out the window to reveal silhouette and structure. After 14 years in traditonal Taoist kung fu clothes, Lucia went full lycra for a while.

A thorough exploration was made of social media, with two kinds of free live classes taking place on facebook and instagram: the ‘Power Hour’ is more challenging training experience, and ‘Slow Flow’ is a chilled out session. New friends were made. 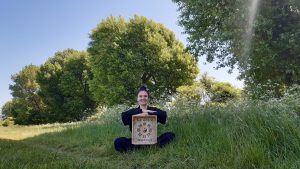 Lucia did her first online public talk on the relationship between the Eight Tai Chi Powers and the Eight Trigrams of the I Ching. Using videos, props, and training exercises she laid out her findings from the last 5 years research on this topic in a two hour session on a Friday night. It went well, and a workshop on building the I Ching, as well as further sessions on individual power and trigram pairs, are in the pipeline.

Lucia has also created a youtube series called Stand Stake With Me, which aims to help students build a solid standing stake practice by slowly increasing the standing stake time and depth of tuition each episode. The fourth episode is due out later on in June. 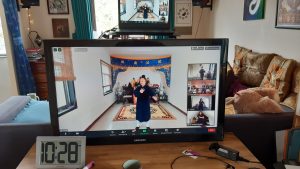 A number of co-operations with Lucia’s teacher Master Yuan Li Min occurred, the first two were two-hour Tai Chi basic skills lessons while we tested the tech set-up, then we ran a full weekend workshop on 13-step Dandao Taijiquan at the start of June. Students got to learn a whole form perfect for small spaces. This will be cropping up on the syllabus again soon.

Looking forward, we plan to keep rolling with the online Thursday evening Qi Gong classes. Tuesday evening Tai Chi will hopefully switch to taking place in parks around Hackney in July; whether the same will happen to gentle Tai Chi on Thursday daytimes is yet to be decided. The retreat that was planned for June will potentially be replaced with a socially distant version, consisting of two training day trips to a forest with a packed lunch in August. More on this later.

Life looks different now to the way it did before lockdown, with tides of change sweeping the globe. The future is uncertain, but also full of possibility. If you wish to centre yourself in uncertain times, to be an anchor for yourself and others as we sail into unknown seas, you are welcome to come and fortify yourself by studying the Wudang arts. We don’t just adapt to survive, we adapt to thrive. See you online, or outside, soon.